Doug Dvorak is the CEO of The Sales Coaching Institute, a worldwide organization that assists clients with sales productivity training and motivational sales excellence management workshops. Under Doug’s leadership, the Institute serves everyone from small to medium-sized businesses and service companies all the way up to Fortune 1000 corporations.

Doug has a well-earned reputation for offering powerful educational methods and motivational techniques based on his years of experience in sales and sales management, corporate education, and success training.

His extensive background in leadership and management shaped his philosophies on motivation and sales which has resulted in him becoming one of the most sought-after sales consultants, lecturers, and teachers in the world. 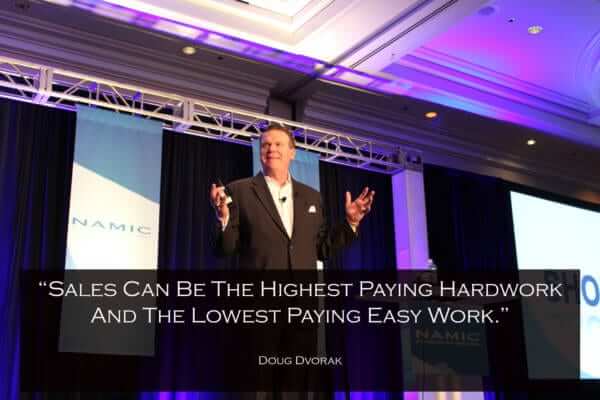 Eminently qualified, Doug is a certified management consultant, sales trainer, and executive coach who holds a BA in Business Administration, an MBA in Marketing Management, and a Doctor of Laws, H.C.

Equally impressive is Doug’s sense of humor. A graduate of the Second City’s Player’s Workshop in Chicago, he received the same training as the likes of Bill Murray, Steve Carell, and Tina Fey at one of the oldest and most prestigious improvisational comedy schools in the world.

Named one of the Top 10 Sales Professionals in America by Personal Selling Power Magazine, Doug’s business ideals have garnered national and international attention from the likes of The Wall Street Journal, CNN, and CBS.

Since 1998, Doug’s vision and leadership have seen him welcomed into several respected national and international Who’s Who organizations, including Who’s Who in Professional Speaking. He is a member of the National Speakers Association and was inducted into the Motivational speaker’s hall of fame in 2014.

Dedicated to sales excellence and success, Doug is a Certified Speaking Professional (CSP) which is the highest designation offered by the National Speakers Association (NSA). To date, he has presented to over one million people on five continents.

Ken Wyrick is Vice President of Training & Curriculum Development for The Sales Coaching Institute, a worldwide organization that assists clients with sales productivity training and sales consulting. Ken is a professional sales and marketing executive with over 30 years of experience in business management, sales, marketing, and strategic planning within Information Technology and Consumer Packaged Goods. Ken has worked for the best-known brands in business today including Apple Inc., PepsiCo, Procter & Gamble, Teradata, and others. He has worked for and consulted with early-stage start-ups and mid-sized organizations across the spectrum of the high-tech industry to include software startups and professional service companies as well as small retail businesses.[…]

Ken has helped launch solutions for a number of software companies that provide products in a variety of different verticals; from supply chain management to K12 curriculum management. He has held sales and sales leadership positions at every level and every size organization: from ‘bag carrying rep’ to Sr. VP level executive; from embryonic start-ups to multi-billion dollar enterprises.

Ken is a graduate of the United States Military Academy at West Point and served five years in the US Army. He currently resides in Canton CT and is a supporter of ‘special needs’ children and adults. He is an avid sports fan and maintains a high level of physical fitness with daily intense workouts. Ken was also Captain of the Army Football Team.

David Sanders is Vice President of Strategy & Talent Acquisition for The Sales Coaching Institute and brings a stellar history of sales leadership success from small VC-backed firms to some of the world’s most successful technology companies, specifically in the enterprise software technology space.

David is passionate about leading sales teams and earning a reputation in information technology as a growth catalyst based on his success in leading strategic sales negotiations, building new business units, launching new and repositioning existing brands, and transforming low-performing teams.[…]

His wealth of experience has prepared him for the Sales Coaching and Training roles he now provides through the Sales Coaching Institute. He has participated and conducted Sales Coaching for Life Science Companies, Financial Institutions, a Regional Pest Control Company, a Global Market Research Firm, an Engineering Service company, a national Construction supplier, a Travel Tour Enterprise, and many others.[…]

Mike’s Coaching expertise has also led him to become a Mentor with Menttium Corporation providing mentoring guidance for rising young executives for such Firms as Blue Cross / Blue Shield, PepsiCo, and MB Financial. He also has a private practice as a life coach with an emphasis on Sales Skills improvement.

Alvar has worked with, mentored, and built high-performing sales teams as an individual contributor, Director of Sales, VP of Sales, and consultant for the past 20 years.[…]

Mr. Centers is a senior sales leader and global business development executive experienced in driving impressive revenue growth for Small-Midsize to Fortune 500 technology service companies like Silicon Graphics (SGI), Unisys, and others. He is an advocate for creating “win-win” partner network alliances through internal & external team collaboration that deliver client value and capitalize on new market opportunities. Alvar is a proven leader with a high degree of confidence, tenacity, and passion for helping others succeed.

Alvar has also mentored and taught entrepreneurs & start-ups how to take their businesses to the next level by utilizing strategic sales and business development techniques.

Rick Struzynski has led technology-based sales teams across the globe for more than 15 years – in industries ranging from analytical instrumentation, capital infrastructure, medical devices, and professional services; with extensive experience in North & South America, Western Europe, and throughout Asia-Pacific. His passion for value-based sales has helped him lead his teams to increase revenue and outpace industry growth rates, while simultaneously increasing gross margins.

Rick has achieved considerable successes as a sales coach, trainer, and consultant by focusing on strategy development and execution, sales organization optimization, and sales training along with ongoing coaching and mentoring.

Not only does Rick have multi-industry and geographic experience, but his successes have been in companies from small startups, all the way through generations-old Fortune 500’s.

Rick has a degree in Electronics Engineering Technology and an International MBA from Rutgers University, attended in Beijing, China.

Ed Ruiz has managed and led medium and large corporations in Latin America and cross-border markets for over 25 years with a keen focus on sales productivity and sales leadership. Ed has deep experience working with clients and companies in the electric sector. Ed’s passion for sales training, sales leadership coaching, and personal development has fueled his client training engagements.

Ed has served as a key executive with companies like TECO-Westinghouse Motor Company (Latin America Operation) and I.G. Group (Transformers Manufacturer), where he currently is the CEO.

Ed knows there needs to be data, facts, and figures to support business and training decisions, so he has managed organizations with over $300M USD in sales. Ed is driven to help his clients produce meaningful revenue results by practicing and demonstrating a positive attitude, motivation, resilience, paradigm shifts, and commitment. Ed works, trains and lives by “The Servant Leadership Model”, by setting examples and driving efforts in more than 7 countries and touching a vast diversity of business sectors and markets.

Ed has professional degrees and certificates with studies in Foreign Trade and Human Science from the Universidad Iberoamericana Golfo Centro, attended Executive programs at MIT-Boston, and concluded a CCI program in Mexico for Personal and Organizational Coaching. Ed recently has been named one of the 60 most influential leaders in Latin America.

Audrey is a highly engaging learning and development professional with a diverse background in Human Resources, instructional design (ILT/OLT), and sales, which makes for effective workshop facilitation and design. Audrey began her career in sales and developed a knack for training and coaching. Since 1992, Audrey has been consulting with corporate clients, developing customized content, and facilitating soft skills, emotional intelligence, leadership, and communication content face to face and through global webinars for clients in a variety of industries.

Previously a Director of Training with a telecom company, she has experience in both management and consulting. Audrey has worked with global Fortune 500 firms both here in the US and abroad. She has been an adjunct professor for the MBA program at Hofstra University and the New York Institute of Technology, where she taught presentation skills/communication skills. She has coached MBA students in successfully navigating their internships.

Audrey is passionate about soft skills professional development. As a lifelong learner her philosophy is centered on two questions: how can I improve things around me and how can I assist employees in becoming more self-aware. She has a passion for making a difference. She is knowledgeable with adult
learning theory, analyzing roles and responsibilities of skills to transform data into optimal results. As a trainer, she utilizes impactful activities to build confidence and essential 21st-century skills for individuals and teams to communicate and collaborate effectively.

Audrey is a faculty member of the American Management Association in New York where she teaches professional development topics throughout the Northeast.

Audrey holds a Bachelor of Fine Arts degree in Painting and Art History. This creativity infuses her training making it fun engaging and highly interactive. She is able to pivot easily with acronyms and industry-specific terminology making it easy to understand.

Miles O’Shea is a curriculum design specialist with over 18 years of experience in the education and learning & development space. He holds a doctorate in Curriculum and Instruction from Indiana University of Pennsylvania.  Miles has designed and delivered educational experiences to learners with a special focus on professional development curricula in the sales and business development arenas.

Miles has dedicated much of his life to finding better ways to educate sales professionals to move learning experiences to become meaningful and transformative.  Miles has performed strong research and experiential foundation in emotional intelligence and understands the importance of reaching learners on an emotional level to facilitate and engender his students and corporate clients to experience new understandings, behaviors, and enhanced levels of engagement and performance.

Some of Miles corporate clients include: Cisco, Agreeya & DMG International